In our recent Productive Living newsletter, David Allen talks about “Toning up your thinking muscles.”  Here’s a letter from Frederick Ross, a graduate fellow at The Rockefeller University who shared his perspective on the brain as a muscle. 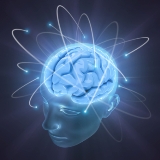 I’m something between a theoretical physicist, mathematician, and theoretical biologist by profession, so I’ve had to be on very intimate terms with my thinking apparatus for many years.

The conscious, symbol manipulating part of our brain is very much like  a muscle.  It burns massive amounts of energy to use, it’s kind of puny for its purpose (just like human musculature — in comparison, someone once got a chimpanzee to lift a barbell, and kept adding weight…until the chimp got bored at tossed it across the room with no effort when there was 600lbs on it).  It works with constant focus, and it can’t be worked that long.  My experience, and that of many other mathematicians aside from the occasional freak is that four to
five hours a day, five to six days a week, is the sustainable schedule for really heavy mental work.  Not writing, or answering email, but trying to build new mathematics or similar tasks.

But GTD isn’t muscle toning, it’s an exoskeleton.  Like mathematics, the idea is to shove the difficult, energy intensive task of reasoning into an external thing that can be handled without fully powering up the Rube Goldberg contraption of our symbolic manipulation system.  The difference is that I can still go through GTD motions very handily when my brain is already burned out from heavy mathematics.

But there are other parts of our brain which are as important for what I do, but aren’t as much recognized.  They’re kind of amorphous, but the two I rely on most heavily are these:

A part that churns at problems continuously, with no effort and only a sense of background noise when it’s going full tilt.  It goes while I’m sleeping, while I’m eating, while I’m doing heavy thinking on other things.  I put the really sticky things in there and wait for the right connection to make them work to pop out.

A sense of taste, not physically, but in the sense of “good taste” socially.  In this case, it’s “good taste” mathematically or scientifically.  My pleasure/pain response has been reprogrammed over the years to make me notice things that have the characteristics of a fertile area to explore, and make me instantly averse to those which are going to be inherently intractable.  Any practical reasons for studying anything I do are later rationalizations of judgements based purely on taste.

And there are many more funny capacities.  If I tell you a set of logical propositions, you won’t be able to reason about them except by dint of extreme effort.  If I cast them as social relationships, you can effortlessly solve problems that would seem impossible on the face of it.

And only the symbolic reasoning machinery, that unreliable, unstable contraption retrofitted onto our brain at some point in our evolutionary past, yet which essentially let us conquer the world, acts like a muscle.

For another interesting read on the science of GTD, read the study on How GTD Works.