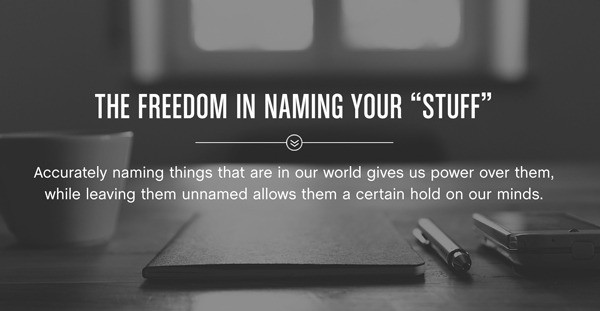 I have been reminded over and over again in working with executives over the years why so much of the GTD implementation process is empowering to so many people: when things we have allowed into our inner or outer world are appropriately and accurately identified for what they are and what they mean to us, we feel curiously freed from them. Accurately naming things that are in our world gives us power over them, while leaving them unnamed allows them a certain hold on our minds.

Various primitive people have beliefs that giving someone your name gives them a certain ability to exert influence over you. Whether that has any truth to it, I’m not sure. But from my own experience, when something that has potential meaning to me is named, it is more known; and when it is known, its potential hold on me is released.

For instance, if you’d just label all your crap “Crap,” you’d probably feel a lot better. If someone had to call Organization Paramedics for you because you’re so out of control, they could simply bring in a big box labeled “All the Stuff I Don’t Know What It Is or What to Do with It.” They’d scour your whole environment and throw everything in that box that fits in that category. In an hour you’d be totally organized—if you didn’t know where something was, you’d now know where it was! The best part would be that the totality of the rest of your world would not have any of that “stuff” in it, and a fresh breeze would be blowing through your psyche.

A good example of this is having a binder on a shelf without a label or title on the spine. Most people are not aware of the slight pressure that unnamed thing maintains on your brain. But if you create a very visible label for it, you’ll notice being more relaxed about it whenever you walk past it. The same is true for storage boxes and file drawers.

More subtly, do you have any problems that you haven’t identified as projects yet? Got anything you’ve been thinking about that needs clarification, resolution, or looking into, that you don’t have on a Projects list yet, which you can look at regularly to keep actions moving toward? Do you have piles of things around your office or your house that have unidentified agreements sitting within them—read? toss? file? Are there things that you think you need to be moving on but you haven’t defined what “moving” looks like physically or visibly yet (next action)?

If you do, then there is good news for you—there is potential energy and freedom embedded there that is available to you…if you name them! If you don’t, well, it’s just the opposite. The problem is that most people have never fully gotten to the place where everything was really categorized appropriately, according to all the different types and amounts of agreements with themselves. You won’t know how much restriction you are actually working under, until you get rid of it, and see how different you feel.

Naming anything we’re experiencing lessens its grip on us. If I’m feeling negative, when I realize it and call it “negativity” I instantly have greater freedom of choice about what to do with or about it. When I’m just in it, and haven’t recognized, acknowledged and accepted it for what it is, I am more of its victim than its master.

A big key is to name things as accurately as possible. If we mislabel, we run the risk of locking ourselves into limitation  and stagnation. To say “I’m a totally disorganized person” is probably not true (you couldn’t get out of bed, if that were true). To say “my thoughts and paperwork about my finances are disorganized” might be much more accurate and would lend direction and energy toward resolution of the situation.

Categorizing is to be used for freedom, not constriction. Many people avoid categorizing because they are avoiding making  a decision about something. Should I read this article? File it? Throw it away? Pass it on to someone? But in the short-term freedom of not deciding, they then constrict themselves with the pressure that they ought to be deciding. I use my Tickler file as an elegant tool to deal with this. I’ll often get things in my in-tray that I just don’t know what to do with them yet (especially particularly cool things I might want to buy). I just ask myself “when will I be smarter?” and tickle it to show up again then. It’s perfectly fine to decide not to decide. You just need to name those things as such, and park them in a decide-not-to-decide system.

Disorganization is simply a discrepancy between where something is and what it means to you. The freedom comes from ensuring that everything has its proper ID badge, so it can get in the right line.