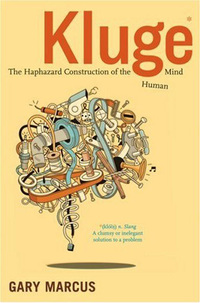 Editor’s Note: We’ve had an incredible response to the request for contributor’s with a cognitive sciences background. Several notable individuals have very kinds offered to author posts that deal with questions of the brain that I believe are of great importance with respect to helping us understand why we do what we do, why GTD works where other systems fail, and how to get the most out of our own curious intellectual circuitry.

One such contributor, Jennifer George has authored the post below and will begin her contributions to GTDtimes with a series of posts based upon the ground-breaking book, Kluge, authored by Gary Marcus.

Jennifer George is a productivity geek and Web addict who writes the blog Lifemuncher. In the real world, she is a fundraiser for UCLA and a graduate student in clinical psychology at Capella University.
by Jennifer George – Community Contributor

Gary Marcus’s book, Kluge: The Haphazard Construction of the Human Mind, examines the strange collection of more or less ancient systems that makes up the modern human brain. As he explains in chapter one:

“Measured nucleotide by nucleotide, the human genome is 98.5 percent identical to that of the chimpanzee. This suggests that the vast majority of our genetic material evolved in the context of creatures who didn’t have language, didn’t have culture, and didn’t reason deliberately. This means that the characteristics we hold most dear, the features that most distinctly define us as human beings — language, culture, explicit thought, must have been built on a genetic bedrock originally adapted from very different purposes.”

The word Kluge is an engineering term, and means an inelegant solution that works, but not in the best way possible because of historical and/or environmental constraints. Since our brains evolved over millions of years, building on existing systems rather than scrapping them and starting fresh, we find ourselves with a brain that’s like a marvelous Rube Goldberg device, held together with duct tape and chewing gum. It’s great at things that helped us survive and reproduce on the African savannah, and not quite as good at things related to language and abstract thought, which evolved much more recently.

According to Marcus, the human brain is primarily interested in helping you survive – noticing predators and food sources and finding potential mates. Figuring out the next step on that computer program you’re writing? Evaluating whom to vote for for president? Not so much.

The book is a fascinating and humbling overview of the evolutionary forces that built the modern brain and the resulting strengths and weaknesses that constrain and influence the way we live. Much of what Marcus describes is directly relevant to GTD and productivity, and could give us insights on better ways to do things. In a series of posts, I will be examining his findings on and trying to apply them to the life of a modern office drone. Look for the first one, on memory, later this week.