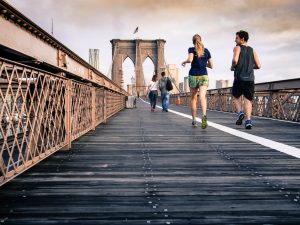 applied to GTD®—especially for anyone still trying to get their systems off the ground and build sustainable habits. Inspired by that article, here are 10 easy tips for success with GTD:

There is a lot that makes up the Getting Things Done® methodology. But that doesn’t mean you need to learn or master it all, all at once. Start with the master moves, like:

3. Trust You Are Not Too Busy

One of the common misconceptions and pushbacks about GTD is that it will take more time than people think they have to spend. The funny thing is, this ignores the time being spent now with inefficient systems and behaviors. Opening and closing an email without making a decision about it is taking more time than it deserves and more time than it would take to make a decision the first time you open it, using the GTD Clarifying Map.

Not having a dedicated time like the Weekly Review to get clear and current means your mind will try to do that kind of process 24/7.

Having the same idea more than once about something you need to do is taking more effort than it deserves (unless you really like having that idea).

One of the things we do at the start of the GTD Fundamentals course is to ask participants to consider, “What’s your desired outcome?” and “What would you like to be doing or experiencing differently?” The idea of inbox zero is nice, but why? Will that give you more peace of mind? Better sleep? The ability to be more present with your friends and family? Better chance at leaving work at work? Asking why will automatically move your thinking higher in your horizons of focus and to the deeper meaning about what drives you. You’ll want to know the why when you least feel like doing the maintenance that comes with being productive.

GTD requires some simple gear. For starters, get an in-tray on your desk designated for new, incoming stuff (separate from work you’ve already decided what you need to do about). That tray will serve you well as a trusted bucket for capturing good ideas, meeting notes, etc. Without a designated tray for “IN,” you risk your whole desk/office/house being your in-tray.

The next thing I would recommend is a ubiquitous capture tool for giving you a fighting chance on having an empty mind. Without a capture tool to grab ideas, your mind is forced to try and hold on to them, and won’t do a very good job doing that. (It’s the wrong tool for the job).

Mix up your tools, habits, and rewards. If you’ve been doing your Weekly Review the same way and they are feeling stale, mix it up by trying it on a different day, time, or location. I’ve heard from many clients that just doing it somewhere other than their office has sparked new inspiration.

Changing tools can also keep the process interesting. I recently moved from Evernote to Wunderlist for storing my projects and actions lists and was reminded about how changing tools can feel new and exciting again. And it forced me to re-evaluate everything on my lists as I transferred things over. I let go of some things and triaged some to Someday/Maybe.

A friend of mine has been working out with a trainer for nearly two years. By this point, she knows the proper form and has a good variety of workout options to stay fit, yet she continues to see the trainer for motivation. She knows the trainer is waiting for her at the gym at 7am every Monday and Wednesday. It keeps her accountable and showing up—for herself and the trainer.

The same idea applies to GTD. You can hire a GTD Coach to motivate you, or at least get a colleague or friend who is also into GTD to check in with. There are often people on our GTD Forums looking for Weekly Review buddies or who use the forums to report in and have others celebrate their successes. Bottom line—don’t white-knuckle this alone. If you’re feeling overwhelmed, get support. If you’re feeling bored or stuck, first see #4, then find someone who you can support and who can support you on your path of mastery.

8. Learn What Works for You

One of the areas I often see people struggle with is using tools that don’t work for them. There is no one perfect tool for GTD, but there are many that will work really well if you work them. If you are repelled in any way by the tools you are using for GTD (capture tools, list manager, reference manager, etc.), then switch it up.

GTD is a mental game, but it’s learned from practical experience. Build some reference points through repetition for having a clear head, inbox zero, Weekly Review, complete projects list, and current lists.

Along the start small theme in #1, give yourself winnable goals for building those reference points, like trying for inbox zero at least once a week. Much like when you were a kid and learned that brushing your teeth felt better than not, knowing what inbox zero feels like will be a strong motivator.

Much like learning a sport, you’ll have some falls with GTD. It’s part of the game. In fact, David Allen has often said that if you’re not out of control regularly, you’re not playing a big enough game. The good news is that it’s easy to get back “on” with GTD if you feel like you’ve fallen off the wagon. Simple things can make a big difference, like doing a Mind Sweep to capture what’s grabbing your attention, doing a thorough Weekly Review, completing that one thing that’s been waking you up at 4am, or clarifying the next action on a project that’s been stuck. Don’t underestimate the power of these key behaviors. They are at the core of mastery with GTD.

David says it takes two minutes to understand the five steps of mastering workflow, two days to get yourself set up, and two years to make the GTD behaviors a habit. So wherever you are in this journey, be kind to yourself and acknowledge your wins.