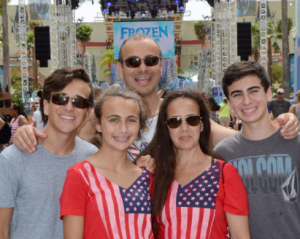 What do you do for work?
I own several companies and coach entrepreneurs how to be successful and happy.

Where do you live?
Near Dallas, Texas.

How did you hear about GTD?
A friend recommended the book and then I hired David Allen to be my first consultant for my first company back in 2001, and I was HOOKED!

How has GTD made a difference in your work and life?
It is hard to describe what a difference GTD has made in my work and life (and aren’t they both the same?). I can tell you that I could NOT imagine my life without GTD. GTD allows me to be highly ambitious while at the same time fully relaxed, present, and moving forward in the right direction(s), while deliciously following my intuitive choices. There is a certain “smirk” that permeates most all GTD enthusiasts – as we have a secure sense of being able to handle anything, and not be stressed about it. Truth is, things take a lot less effort and can be done in a much faster time than people realize. After all, as David says, “There are no problems, only projects.”

What areas of GTD are you doing really well (or at least better than you used to)?
Keeping my head clear, and following my intuitive choices, is something I have focused on and can finally say, I am pretty good at it – most of the time.

What areas of GTD would you like to get even better at doing?
I would love to be able to move more quickly, and effortlessly, up and down between the levels of the Horizons of Focus. (And yes, it is a current project.)

What is one piece of advice you would give to someone just starting out with GTD?
Best advice I got, from David, and I think I would pass this along as the best piece of advice I would give to anybody wanting to start, or already doing GTD. Doing GTD 100%, is light years better and significantly different than just doing it 99%.  You won’t believe how much better and incredible it is – and unfortunately, the only way to understand this advice, is to experience it.