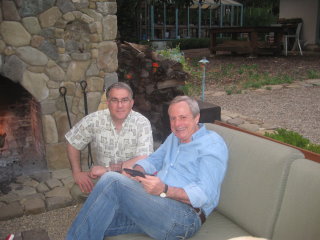 Several of us recently got together at David Allen’s house for a casual get-together. For some of us, me at least, it was the first time to see David since he surfaced from writing his soon-to-be-bestseller GTD book #3, Making it All Work

David’s been submerged in the details of the book writing for some time and, with the current draft off to the publisher, it was time to hang out.

David and I got a few minutes to geek out with the new Nokia E90 Executive Communicator and talk about Notes 8. (We kept the geek talk to a minimum.)

Then, we visited with several of the David Allen Company team in David and Kathryn’s way cool “outdoor living room”. 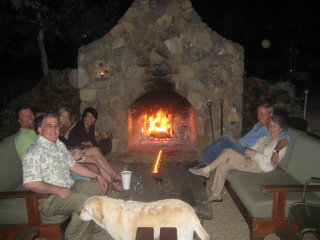 We had a wonderful time. On the way out of town, Paul Garth invited us for a tour of the new world headquarters of The David Allen Company:
The all-glass conference room is equipped with the emperor’s new conference table and chairs. (Only GTD black-belts can see it.)

Paul prepares to demonstrate the office fountain to Amy, Emily, and Kelly. “See, I just dropped a pebble in David’s new fountain… How does the water respond? Right, It does “pebble.”

Paul and I wondered what would happen if we dropped in a rock (just to test David’s theory, of course)…

Yup, the water responded appropriately, and Paul and I got to mop up the 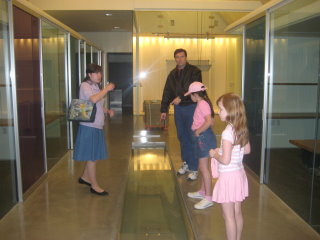