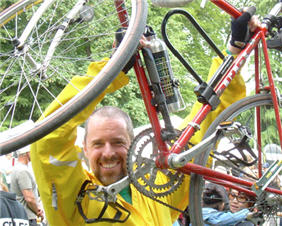 We love letters from GTD’ers.  Especially when we receive one that has so much heart, love and joy that makes us proud that GTD can have such a profound personal impact.  Here’s Tim’s story:

Earlier today I listened to your “Problems or Projects?” podcast. Thank you for sharing this topic so succinctly and for including an example of how you’ve used this approach in your own personal life. I feel inspired to share how I created a project from a major problem that came along last year and the profound impact that having access to GTD had during the most challenging months of my life. To give a little background, almost exactly a year ago I was admitted to the emergency ward of our local hospital after suffering from intense pain in my chest and lower back. Much to my surprise I was diagnosed with an aggressive form of cancer. It was serious enough that, at times, I wondered if I would live to see 2009. At the beginning of August I began an intensive chemotherapy treatment, very similar to the one administered to Tour de France legend, Lance Armstrong, and began a roller coaster ride through cancer treatments. 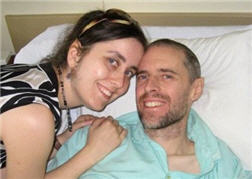 Practically overnight I went from having an active life, working as a life coach, technology consultant and yoga teacher, to spending weeks in hospital beds, sometimes too exhausted to walk more than a few steps. My long list of appointments and commitments was replaced with a single objective – to heal. With no work commitments to crowd my time, on days when I had some energy to spare I decided to take the opportunity to probe further into some topics that had caught my attention in the past – among them was GTD. I started listening to David Allen’s inaugural “Getting Things Done” book in audio form and did some reading on the web to get a handle on the basics.

Soon after beginning my research I felt inspired to put the GTD system through its paces. I installed the Things software for Mac and created my very first project, that I entitled “Healing Journey 2008“. In order to call it a project I needed a measurable objective and a time frame – I came up with “being cancer free by Christmas”. I didn’t know at this point how or if this would happen, but it lifted my spirits to declare this as a possibility and I had no trouble coming up with actions to add to this new project.  Specific tasks centered around asking others for help, something I got very good at during my trials and tribulations, following up on medical appointments and writing updates and notes of gratitude to the many people known and unknown who championed my healing journey.

I worked with a life coach throughout my treatment process and during our sessions we treated the cancer simply as a “circumstance”. This created a space that allowed me to design a fulfilling life in spite of my illness. More projects were soon added to the list. Among them: taking a cruise with my wife, Christa – something we both fantasized about on my darkest days – traveling to Maui and creating a workshop to share the many insights and lessons that I gained as I came face to face with cancer. It wasn’t difficult coming up with actions for each of these projects, and I was amazed at how many of them I could complete, even in my weakened state. By applying GTD principles these inspiring visions of the future that gave me a strong will to live went from being conceptual to feeling tangible.

On December 14, 2008, after completing four rounds of chemotherapy and a major surgery, I received the best Christmas present I could have asked for – a clean bill of health. With much celebration, I declared my “Healing Journey 2008” project complete. Since then my wife and I have enjoyed a fun and relaxing cruise along the Mexican Riviera and a wonderful week exploring Maui. I also launched a workshop called It’s About Time in Vancouver, Canada on May 30 and a few weeks later completed a 262 kilometer (162 mile) cycling trip from Vancouver to Seattle to raise money for the BC Cancer Foundation.

The GTD system continues to play an important role in my personal and professional life and I’ve been happy to share this system with friends, coaching clients and workshop participants. Many thanks to you, David Allen and the rest of your team for designing a truly useful system and for making GTD so readily accessible.

Thank you, as well, for giving me the opportunity to share my story. Please feel free to forward this along to anyone who would find it useful and to publish what I’ve written on your blog as you see fit.