A Community Contribution by Erik Hanberg.  Please note, this is Erik’s personal opinion. Things is not affiliated with or endorsed by David Allen Company. But we’re happy to pass along an objective review from a community member!

Too Much to Do

In April of this year, I left my full time job to “go freelance.” My schedule has been all over the place as a result. Between writing and doing web development for my fiancé’s graphic design firm,  managing my coworking office space in downtown Tacoma, operating my small theater production company, presiding over my condo association,  trying to get a novel published, and last – but most certainly not least  – getting married at the end of the year; you could say I’m a pretty busy guy.  While no single one of these activities takes up a full work week, the number and variety of things I needed to do made me feel like I was dropping the ball on all of them.

changed all that. I’m actually making some headway on all these fronts. I first implemented his system with long lists in Microsoft Word. That was until I discovered “Things” to manage my things.

Things is a GTD system designed for Mac computers with mobile applications for the iPhone and iTouch. To any user of David Allen’s productivity system, Things should look very familiar. Hot keys (or mouse clicking) will bring up a task window for easy entry. To each task, you can add notes, due dates, links to files, and customizable tags, which serve as “contexts.”

I appreciate that the tags are easy to use and customize. I kept many of the preset tags-phone, read/review, errand, home-but (following GTD) I created a “Waiting For” tag, which allows me to keep track of shipments, emails, and phone calls I’m expecting. I also created a “pack” tag, which I use in the weeks before a trip.

Things offers a feature called “teammates” which helps with collaboration. This pulls from your Mac’s address book and allows you to add a contact’s name to the program. Have something to talk over with a coworker? Drag the item under their name and it’s waiting for you when you see them next.

I can also set up scheduled and repeating tasks very quickly. A new task to post on my blog shows up daily. A task to review my projects list shows up every weekend. The “today” toggle lets me quickly see my scheduled items, items due in the next couple days, and any overdue tasks.

As David Allen said, the key to the system is that it’s with you all the time. Because of the iPhone sync, if my phone is with me (and it always is) my system is with me. The quick entry field lets me jot down a note in less than a minute if I’m at a restaurant, in a meeting, or otherwise away from the computer. Later, when the phone and computer are on the same wireless network, they sync. (One current drawback to the iPhone app is that is does not allow for my context tags, although Things developers have indicated the next update will have tags enabled.) 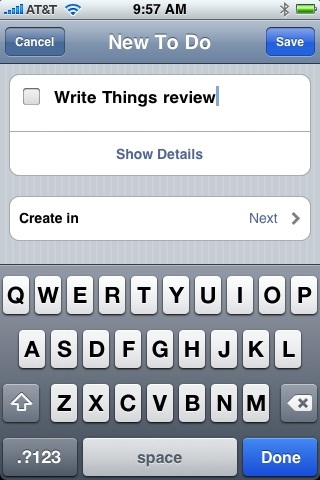 A Few Things that Would Improve “Things”

There are some features I’d really like to see added. Currently, the drag-and-drop feature lets you place action items inside project folders for easy sorting. Handy, normally, especially during my weekly review when I check that I have a next action item for each project. But, if you spend most of your time in the next action window as I do-and as Allen would probably recommend-the feature becomes cumbersome. I don’t need to know that “Call parents for carpet cleaning recommendations” is under the “home care” project. I just need a list of calls to make. But I can’t turn it off, which means that I lose a lot of screen real estate and can only see a fraction of the calls I need to make on a single screen. I’ve opted for more items on a page, so I don’t use the projects tab the way I should.

The projects list and the someday/maybe list don’t play well together yet, either. I can’t add a project directly into the Someday list, I have to add it in projects and then drag it into the list.

And I have yet to touch the “inbox” feature. For the life of me I cannot figure out what to put in there that I can’t do with the next action list. Putting items in this folder doesn’t make sense. If I’ve taken the time to type out my action note, it’s safe to say I’ve already processed it from one of my real inboxes-mail, email, voicemail, etc.

There was one debilitating bug. A few months after use, the program slowed to a crawl as a result of some flaw in the XML database to the point I could barely open it. Browsing the support forums, I couldn’t find anyone else who had the problem, so I think it was an isolated incident. Getting it running again took a couple hours, and illustrated to me how much I’ve come to rely on the program.

Things is still in beta testing for the Mac, and will be officially released January 6, 2009 at MacWorld. It is currently free and will be $39 when it’s released (if you sign up for their newsletter before its launch) and $49 after that. The iPhone program is $9.99.

Things has been intuitive, helpful, and even fun. My minor quibbles are nothing compared to the benefits I’ve gotten from the program. The Mac-iPhone sync gives me a quick-entry capability to get my thoughts out of my head and into a program that is always with me. It has become invaluable to getting things done.