For anyone who has tackled a science project, or any kind of project, here is a Community Contribution from April Perry

My 11-year-old daughter came home with a huge packet of science project information a few weeks ago, and the entire family started feeling the stress. Before the world of computers and fancy tri-fold poster board, science projects were a cinch. I remember hunkering down at my dining room table with construction paper, some magic markers, and a simple sheet of white poster board. But today’s children have a lot more pressure. They need charts and graphs, digital photographs, and well-written hypotheses. It’s enough to overwhelm the children and the parents.

Instead of letting the stress get to me, I decided to apply the principles I learned from Getting Things Done and show my daughter that projects don’t have to give us headaches. Here’s what we did:

Step 1: We read through the packet of information and made a list of tasks based on context. 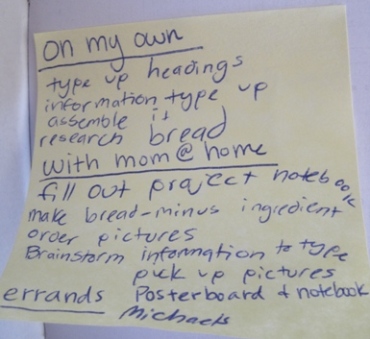 My daughter got out a little sticky-note pad, and she divided her tasks into the following categories:

Step 2: Each day we started checking things off the list, depending on our energy level, schedule, etc. When we were out at the mall one evening, my daughter said, “Since we’re running errands, can we pick up the poster board and notebook I need from the art store?” Fifteen minutes later, it was done.

When I was helping the other children with their homework after school, my daughter did the typing and research she’d already determined she could do on her own. Even though she was a little timid at first, it turned out great.

On the days we didn’t have anything planned, we looked at the list of things we needed to do together. Her project was to see what would happen to a loaf of bread when one of four ingredients was left out. So one day, I stayed in my pajamas until noon while we mixed up five different little loaves of bread, including the “control” loaf. Then we ate the tasty ones for lunch. 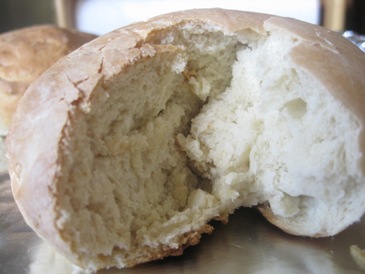 The greatest part was that whenever my daughter would say, “Mom, I don’t want to do the Science Fair,” I would say, “Don’t think about the whole project. Just think about your next action. What is the next, specific thing you need to do?” Since she’d already taken the time to identify each task, it only took a second for her to figure out the next action. She became much more calm and confident as the project progressed.

Step 3: We set a date on the calendar for when we would put the entire project together. Prepping each component of the project wasn’t too difficult, but we knew we needed an entire evening to print and assemble everything onto the poster board. Our little three-year-old LIVES for projects like this, and we were sure that involving him would spell “catastrophe.”

When my other daughter and husband bought tickets to attend the Daddy-Daughter Dance at school one Friday night, we decided that would be the perfect time to have our own party, science-fair style. We put it on the calendar and didn’t worry about the details one bit. We tucked the three-year-old in bed and had such a fun time cutting our print-outs, chatting, gluing, and enjoying our work together. We even learned to make photo collages together using Picasa, and she was so excited to make the background purple. 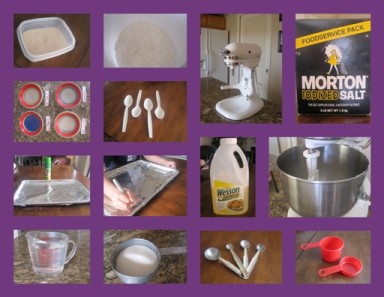 Tackling the Science Fair together strengthened our relationship, gave me a chance to teach my daughter about project planning, and even provided a tasty lunch along the way. The smile on her face when we finished that project was priceless, and now we’re already brainstorming for next year.

April Perry is the mother of four children and the Co-Director of The Power of Moms.